Disclaimer: The following story is not connected with the Star Wars franchise, or its creator, George Lucas and does not represent the characters, writers or producers of set franchise.

Jacen, Jaina and Anakin Solo had stumbled upon a very important piece of historical data; a chip which contained a number of holovids dating back over 45 years, all of which seemingly containing candid videos of sexual incidents. The first two videos had involved their grandfather, Anakin Solo and a Padawan they had never even known existed. All three Solos had been mesmerized and turned on by the seemingly unrestrained erotic acts involving two Jedi of the Old Republic. They simply couldn’t wait for another showing, but unfortunately for the three siblings, they had been recalled back to the Jedi training facility on the jungle planet of Yavin 4. They had come home to Coruscant for a brief visit with their mother and father, but after their Uncle Luke decided that their break had lasted long enough, he had recalled them to meet him on the planet of Bilbringi where after a very brief stay; they would make their way back to the Jedi Temple at Yavin. END_OF_DOCUMENT_TOKEN_TO_BE_REPLACED

How lengthy Padme will be able to negotiate like this with entire senate? 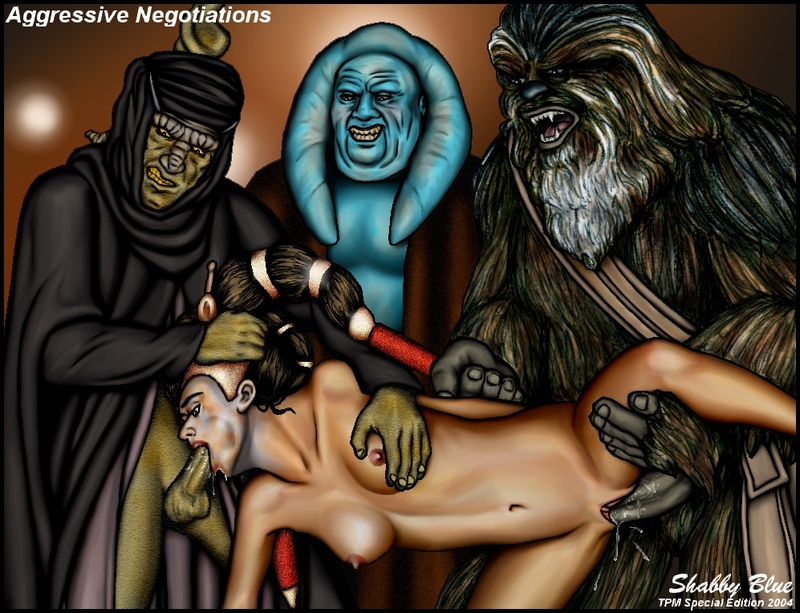 Adi Gallia eventually has some time for herself and her lightsaber!

Padme woke up in the nice bed. She was well rested and didn’t feel any negative effects from yesterday’s adventures. There was a lot of food on the table near bed. She got up from bed. She couldn’t find any clothes anywhere so she just sat on the chair naked. After eating she got into bed again. Suddenly Padme felt surge to touch herself. With one hand she started rubbing her clitoris, with other she massaged her breasts. It was not enough so Padme put three fingers inside. After some time she felt that it is not enough too. She licked her wet fingers and looked around.  There was a dildo on the table, Padme didn’t noticed it before. Moment later it was in Padmes pussy. She was moving dildo as fast as she could. Her moans there heard far away. Bed was now wet from Padmes fluids. She came fast and orgasm was short but still it was good. About ten minutes later Aayala entered the room. Padme was embarrassed. She was still resting on the bed. Her pussy was wet and dildo was nearby, fluids on him showed that it was used not long ago. Aayala just smiled and ordered Padme to follow her. Padme trusted Jedi so followed her. The girls entered a big chamber. In the middle of it there was a table. There were some holes in some places on it. Aayala ordered Padme to lay on it. She hesitated, but Aayalas look somehow made Padme to obey. Then she was laying on it, jedi tied her hands and legs to the table. Aayala took some strange pot filled with blue liquid she spilled it on the lower part Padmes body. That liquid was nano bots. They moved into Padmes pussy. At the same moment she started moaning. A lot of juices were coming from her. Padme was moaning like crazy, more and more fluids kept coming from her. It was not normal. Padme felt those nano bots inside of her. But it didn’t take her closer to orgasm. All fluids were leaking to the holes. It seems there was no end to this. After about thirty minutes. She was about to collapse, then she felt orgasm it was so good that she actually started screaming.  Then it was over she collapsed. Padme woke up in her bed, in senators living quarters.

The mighty wind has blwon Princess Leia’s dress away!

Ahsoka demonstrates herself sans her top on in front of anakin so he will poke her.

Watch your back because this artful Star Wars thing is much fuller of surprises than you can possibly imagine: well-hung dudes… This very unusual episode of craze the most fuckable personages of this show after get into various sex situation! Some Star Wars sex sluts long for a bit ofcock-to-pussy kind of action – they gets screwed in all possible places take sizey thick cocks into!

See how Princess Leia is surprised when she gets fucked by busty redhead shemale!

We are anxious to shove seomthing inside this well-endowed Star Wars babe with her ass cheeks so hot and a fuck-willing cunt ;) Princess Leia Here is an episode and of the most uncontrolled lascivious that are screwing… These Star Wars sex sluts are anxious for some raw fuck – they gets shagged on the spot accept monstrous dicks in…

Leia Skywalker discovers her destiny… but looks like she will discover her tits more sooner!